It’s no secret that Development (“Dev”) and Operations (“Ops”) departments have a tendency to butt heads. The most common point of contention between these two departments is ownership. Traditionally Ops owns and manages everything that isn’t direct development, such as systems administration, systems engineering, database administration, security, networking, and various other subdisciplines. On the flipside of the coin, Dev is responsible for product development and quality assurance. The conflict between the two departments happens in the overlap of duties, especially in the case of managing development resources. When it comes to Docker containers, there is often disagreement as to which department actually owns them because the same container can be used in both development and production environments.

If you were to ask me, I would say without hesitation that Dev owns Docker containers, but thanks to the obvious bias I have as a developer, that is probably an overly-simplistic viewpoint. In my personal experience, getting development-related resources from Ops can be tough. Now don’t get me wrong, I’m under no impression that this is because of some Shakespearian blood-feud; Ops just has different priorities than Dev, and spinning up yet another test server just happens to land a little further down the list. When it comes to managing development resources, I think it is a no-brainer that they should fall under the Dev umbrella. Empowering Dev to manage their own resources reduces tension between the departments, manages time and priorities more appropriately, and keeps things running smoothly. 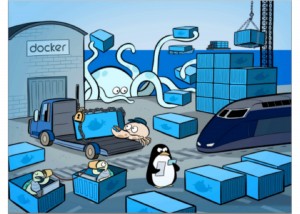 On the flip side, Docker containers that aren’t used directly for development should fall under the purview of Ops. Database containers are good examples of this type of separation. While the MySQL container may be used by Dev, no development needs to be done directly on it, which makes the separation pretty clear. But what about more specialized containers that developers work directly on, like workers or even (in some instances) web servers? It doesn’t really make sense for either department to have full control over these containers, as developers may need to make changes to the containers themselves (for the sake of development) that would normally fall under the Ops umbrella if there was clear separation between development and production environments.

The best solution I can think of to this particular problem would be joint custody of ambiguous containers. I think the reason this would work well is that it would require clear documentation and communication between Dev and Ops as to how these types of containers are maintained, which would in turn keep everybody happy and on the same page. A possible process that could work well would be for Ops to be responsible for provisioning base containers, with the understanding that the high-level configuration of these types of containers would be manageable by Dev. Because Ops typically handles releases, it would then be back on Ops to approve any changes made by Dev to these containers before deploying. This type of checks-and-balances system would provide a high level of transparency between the two departments, and also maintain a healthy partnership between them.

Zachary Flower (@zachflower) is a freelance web developer, writer, and polymath. He has an eye for simplicity and usability, and strives to build products with both the end user, and business goals, in mind. From building projects for the NSA to features for Buffer, Zach has always taken a strong stand against needlessly reinventing the wheel, often advocating for using well established third-party and open source services and solutions to improve the efficiency and reliability of a development project.

Zachary Flower (@zachflower) is a Fixate IO Contributor and lead developer at Emerson Stone, a Boulder-based design and branding agency. He has an eye for simplicity and usability, and strives to build products with both the end user and business goals in mind. From building projects for the NSA to creating features for companies like Name.com and Buffer, Zach has always taken a strong stand against needlessly reinventing the wheel, often advocating for the use of well established third-party and open source services and solutions to improve the efficiency and reliability of a development project.