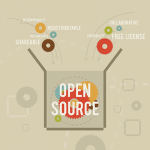 Someone recently asked me, rather smugly I might add, “who’s ever made money from open source?” At the time I naively answered with the first person who came to mind, which was Rod Johnson, the creator of Java’s Spring Framework. My mind quickly began retrieving other examples, but in the process I began to wonder about the motivation behind the question.

The inference, of course, was that open source is free. Such a sentiment speaks not only to monetization but to the premise of open source, which raises a good many questions. As Karim R. Lakhani and Robert G Wolf wrote, “Many are puzzled by what appears to be irrational and altruistic behavior… giving code away, revealing proprietary information, and helping strangers solve their technical problems.”

While many thought that better jobs, career advancement, and so on are the main drivers, Lakhani and Wolf discovered it is how creative a person feels when working on the project (what they call “enjoyment-based intrinsic motivation”) is the strongest and most pervasive driver. They also found that user need, intellectual stimulation derived from writing code, and improving programming skills are top motivators for project participation.

Here at Sumo Logic, we have some very talented developers on the engineering team and they are passionate about both the Sumo Logic application and giving back. To showcase some of the open-source projects our developers are working on, as well as other commits from our community we’ve created a gallery on our developer site where you can quickly browse projects and dive into the repos, code, and gists we’ve committed. Here’s a sampling of what you’ll find:

Parsing out fields on the command line can be cumbersome. Aggregating is basically impossible, and there is no good way to view the results. Written by Russell Cohen, Sumoshell is collection of CLI utilities written in Go that you can use to improve analyzing log files. Grep can’t tell that some log lines span multiple individual lines. In Sumoshell, each individual command acts as a phase in a pipeline to get the answer you want. Sumoshell brings a lot of the functionality of Sumo Logic to the command line.

As our Chief Architect, Stefan Zier, explains in this blog post, all changes to production environments at Sumo Logic follow a well-documented change management process. In the past, we manually tied together JIRA and Slack to get from a proposal to approved change in the most expedient manner. So we built a plugin for our sumobot Slack bot. Check out both the post and the plugin.

Written by Yoway Buorn, the SDK provides a Python interface to the Sumo Logic REST API. The idea is to make it easier to hit the API in Python code. Feel free to add your scripts and programs to the scripts folder.

Sumo Logic provides a cloud-based log management solution. It can process and analyze log files in petabyte scale. This library provides a Java client to execute searches on the data collected by the Sumo Logic service.

Machine data and analytics is about more than just server logging and aggregation. There are some interesting problems yet to be solved. Currently, you’ll find numerous appenders for .Net and Log4j, search utilities for Ruby and Java, Chef Cookbooks, and more. We could additional examples calling our REST API’s from different languages. As we build our developer community, we’d like to invite you contribute. Check out the open-source projects landing page and browse through the projects. Feel free to fork a project and share, or add examples to folders where indicated.