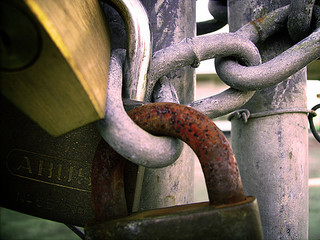 Lock and Chain – by Martin Magdalene

One of the basic principles in information security is the Principle of Least Privilege. The idea is simple: give every user/process/system the minimal amount of access required to perform its tasks. In this post, I’ll describe how this principle can be applied to applications running in a cluster of EC2 instances that need access to AWS resources.

What are we protecting?

The AWS Access Key ID and Secret are innocent looking strings. I’ve seen people casually toss them around scripts and bake them into AMIs. When compromised, however, they give the attacker full control over all of our resources in AWS. This goes beyond root access on a single box – it’s “god mode” for your entire AWS world! Needless to say, it is critical to limit both the likelihood of a successful attack and the exposure in case of a successful attack against one part of your application.

Why do we need to expose AWS credentials at all?

Since our applications run on EC2 instances and access other AWS services, such as S3, SQS, SimpleDB, etc, they need AWS credentials to run and perform their functions.

Limiting the likelihood of an attack: Protecting AWS credentials

There are many other methods for doing this. Shlomo Swidler compared tradeoffs between different methods for keeping your credentials secure in EC2 instances.

To add a twist, we obfuscate the AWS credentials on disk. We encrypt them using a hard-coded, symmetric key. This obfuscation, an additional Defense-in-Depth measure, makes it a little more difficult to get the plain text credentials in the case of instance compromise. It also makes shoulder surfing much more challenging.

AWS’s IAM service allows us to set up users with limited permissions, using groups and policies. Using IAM, we can create a separate user for every application in our stack, limiting the policy to the bare minimum of resources/actions required by the application. Fortunately, the actions available in policies directly correspond to AWS API calls, so one can simply analyze which calls an application makes to the AWS API and derive the policy from this list.

For every application-specific user, we create a separate set of AWS credentials and store them in the application’s configuration file.

If your stack consists of more than one or two applications or instances, the most practical option for configuring IAM users is automation. At Sumo Logic, our deployment tools create a unique set of IAM users. One set of users per deployment and one user per application within the deployment. Each user is assigned a policy that restricts access to only those of the deployments resources that are required for the application.

One wrinkle in this scheme is that the AWS credentials created for the IAM users need to be stored somewhere after their initial creation. After the initial creation of the AWS credentials, they can never be retrieved from AWS again. Since many of our instances are short-lived, we needed to make sure we could use the credentials again later. To solve this particular issue, we encrypt the credentials, then store them in SimpleDB. The key used for this encryption does not live in AWS and is well-protected on hardware tokens.

It is critical to treat your AWS credentials as secrets and assign point-of-use specific credentials with minimal privileges. IAM and automation are essential enablers to make this practical.

Update (6/12/2012): AWS released a feature named IAM Roles for EC2 Instances today. It makes temporary a set of AWS credentials available via instance metadata. The credentials are rotated multiple times a day. IAM Roles add a lot of convenience, especially in conjunction with the AWS SDK for Java.

Unfortunately, this approach has an Achilles heel: any user with access to the instance can now execute a simple HTTP request and get a valid set of AWS credentials. To mitigate some of the risk, a local firewall, such as iptables, can be used to restrict HTTP access to a subset of users on the machine.

+ User privileges and obfuscation offer a stronger defense in scenarios where a single (non-root) user is compromised.
+ Per-application (not per-instance) AWS credentials are easier to reason about.
– The rotation of IAM keys performed transparently by IAM roles adds security. An attacker has to maintain access to a compromised machine to maintain access to valid credentials.

Best of Both Worlds

AWS’s approach could be improved upon with a small tweak: Authenticate access to the temporary/rotating credentials T in instance metadata using another pair of credentials A. A itself would not have any privileges other than accessing T from within an instance. This approach would be a “best of both worlds”. Access to A could be restricted using the methods described above, but keys would still be rotated on an ongoing basis.

Stefan was Sumo’s first engineer and Chief Architect. He enjoys working on cloud plumbing and is plotting to automate his job fully, so he can spend all his time skiing in Tahoe.

It’s essential to choose the right tool for the job. I have an old, sturdy screwdriver that I use for lots of odd DIY jobs around my house, like cleaning gutters, opening paint cans, and general maintenance on my lawnmower. However, when I’m performing an upgrade on my computer, a large, rusty screwdriver isn’t the best tool to remove the screws anchoring my motherboard.

Cloud-native and serverless come hand in hand. One of the initial motivations to move business workflows to the cloud was related to cutting costs related to provisioning infrastructure and elasticity that on-demand allocation of resources is offering. The serverless approach takes this to the next level, where infrastructure is provisioned only for the time of code execution, and the whole stack below the executed code, including application components, OS, and hardware (of course) is provided by the cloud vendor. No surprise this approach takes more and more traction, although it’s nothing new.

One of Amazon Web Services’ (AWS) most well-known services is AWS DynamoDB. Some of AWS’s most notable customers use DynamoDB for their database needs – companies such as Netflix, The Pokemon Company, and Snapchat.