Sumo Logic and Amazon GuardDuty to the rescue

Sumo Logic was founded over seven years ago, by security industry professionals, as a secure, cloud-native, machine data analytics platform, to convert machine data into real-time continuous intelligence, providing organizations with the full-stack visibility, analytics and insights they need to build, run and secure their modern applications and cloud infrastructures.

The Sumo Logic platform provides security analytics and visibility across the entire AWS environment with context derived from details such as user access, platform configurations, changes, and with the ability to generate audit trails to demonstrate compliance with industry standards. Sumo Logic also correlates analytics from Crowdstrike threat intelligence to identify risks and threats in the AWS environment such as communications with malicious IPs, URLs, or Domains.

At AWS’ annual re:Invent 2017 conference in Las Vegas this week, they announced the availability of Amazon GuardDuty. GuardDuty, provides AWS users with a continuous security monitoring and threat detection service. And due to Sumo Logic’s strong, and long standing relationship with AWS, Sumo Logic was provided early access to the beta version of GuardDuty, which allowed the team to develop, announce and release in parallel with Amazon, the complimentary Sumo Logic Amazon GuardDuty App. 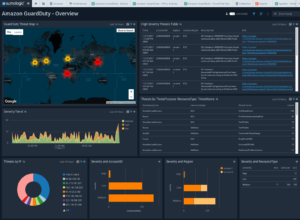 The way GuardDuty works is by gathering log data from three distinct areas of the AWS cloud environment including:

Along with the log data above, AWS provides additional sources of context (including threat intel associated with the AWS environment) to provide users with identification of potential threats in their environments. These potential threats are called “findings” by GuardDuty. Each “finding” provides users with details about each of the threats identified so that they can take any necessary action as needed.

“Findings” details include to following information:

Click to Fix: The Sumo Logic Amazon GuardDuty App allows users to rapidly, and visually identify “findings”, ranked by their severity levels (high, medium, and low), and can simply click on any of them to be automatically routed to their AWS environment to take any necessary actions for remediation.

Value-added Context: The Sumo Logic Amazon GuardDuty App adds additional sources of analytics for deeper and wider visibility in the AWS environment and context across the organization including full stack visibility into application/infra logs, Application/Elastic Load Balancer (ALB/ELB) performance, and supplemental threat intel provided by Crowdstrike with no additional fees.

The new Amazon GuardDuty offering along with capabilities from Sumo Logic’s tightly integrated GuardDuty App provides organizations with the tools they need to more simply and effectively manage and monitor their AWS cloud environments. And with the visibility for more rapid detection and remediation of real and potential threats to mission critical resources in those environments.

Mike Reinhart serves as Sumo Logic’s director of product marketing for cloud security & compliance and brings decades of leadership experience in global technology companies from some of the world's largest corporations to the early stage start-ups, focused on cloud, SaaS, communications and security service offerings. His background includes defining, developing, new markets and leading the go-to-market strategies and efforts for these new security and technology offerings. Mike holds a Bachelor of Science degree in Information Systems Management and is regularly sought after to speak at security industry, compliance and technology events worldwide.