Companies that move fast put pressure on developers and QA to continually innovate and push software out. This leaves the people with the pager, quite often the same developers, dealing with a continuous flow of production problems. On-call pain is the level of interrupts (pager notifications), plus the level of work that the on-call is expected to perform “keeping the system up” during their shift. How can we reduce this pain without slowing down development or having decrees like “there shall be no errors in our logs”? Assuming there is no time to do overhauls of monitoring systems, or make major architecture changes, here is a step-by-step approach to reducing on-call pain.

As always, start out by measuring where you are now and setting a goal of where you want to be.

The first step to reducing on-call pain is to systematically reduce the alert noise. The easiest way to do it is to simply ask the on-call to keep track of the noise (alarms that he did not have to fix). 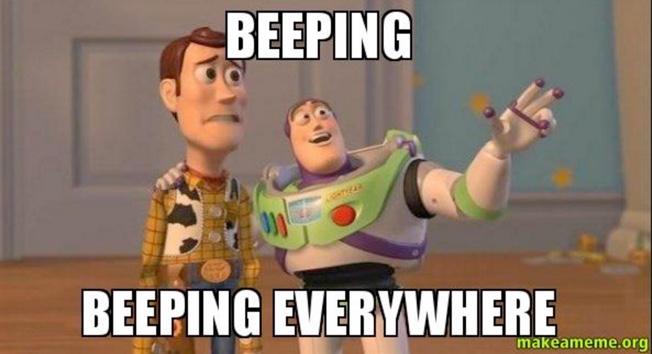 Any time that you have playbooks or procedures for troubleshooting common problems, ask yourself if you are engaging in human abuse. Most playbooks consist of instructions which require very little actual human intelligence. So why use a human do to them?

Get The Metrics Right

Metrics have the ability to reduce on-call pain, if used correctly. If you know and trust your metrics, you can create an internal Service Level Agreement that is reliable. A breach of that SLA pages the on-call. If you have the right type of metrics and are able to display and navigate them in a meaningful way, then the on-call can quickly focus on the problem without getting inundated with tens of alarms from various systems.

If an on-call is constantly working in an interrupt-driven mode, it’s hard for him or her to assess the situation. The urgency is always the same, no matter what is going on. Non-critical interrupts increase stress as well as time to resolution. This is where the subject of severity comes in. Define severities from highest to lowest. These might depend on the tools you have, but generally you want three severities:

I know that I began with statements like “assuming you have no time,” but now the on-calls have more time. The on-calls should spend that time following up on root causes and really making the changes that will have a lasting impact on stability of the software itself.

I have not covered follow-the-sun on-calls where an on-call shift only happens during working hours and gets handed off to another region of the world. I have also not covered the decentralized model of having each development team to carry primary pagers only for their piece of the world. I have not covered these topics because they share the pain between more people. I believe that a company can rationally make a decision to share the pain only once the oncall pain has been reduced as much as possible. So, I will leave the discussion of sharing the pain for another blog post.