As a longtime DevOps engineer with a passion for gaming and creating things, I truly believe that in order to present data correctly, you must first understand the utility of a tool without getting hung up on the output (data). To understand why this matters, I’ll use Sumo Logic’s machine data analytics platform as an example.

With a better understanding of how our platform works, you’ll be able to turn seemingly disparate data into valuable security, operational or business insights that directly service your organization’s specific needs and goals.

The Beginning of Something Great

Last year, I was sitting with some colleagues at lunch and suggested that it would be super cool to have a video game at our trade show booth. We all agreed it was a great idea, and what started as a personal at-home project turned into a journey to extract game data, and present it in a compelling and instructive manner. The following is how this simple idea unfolded over time and what we learned as a result. 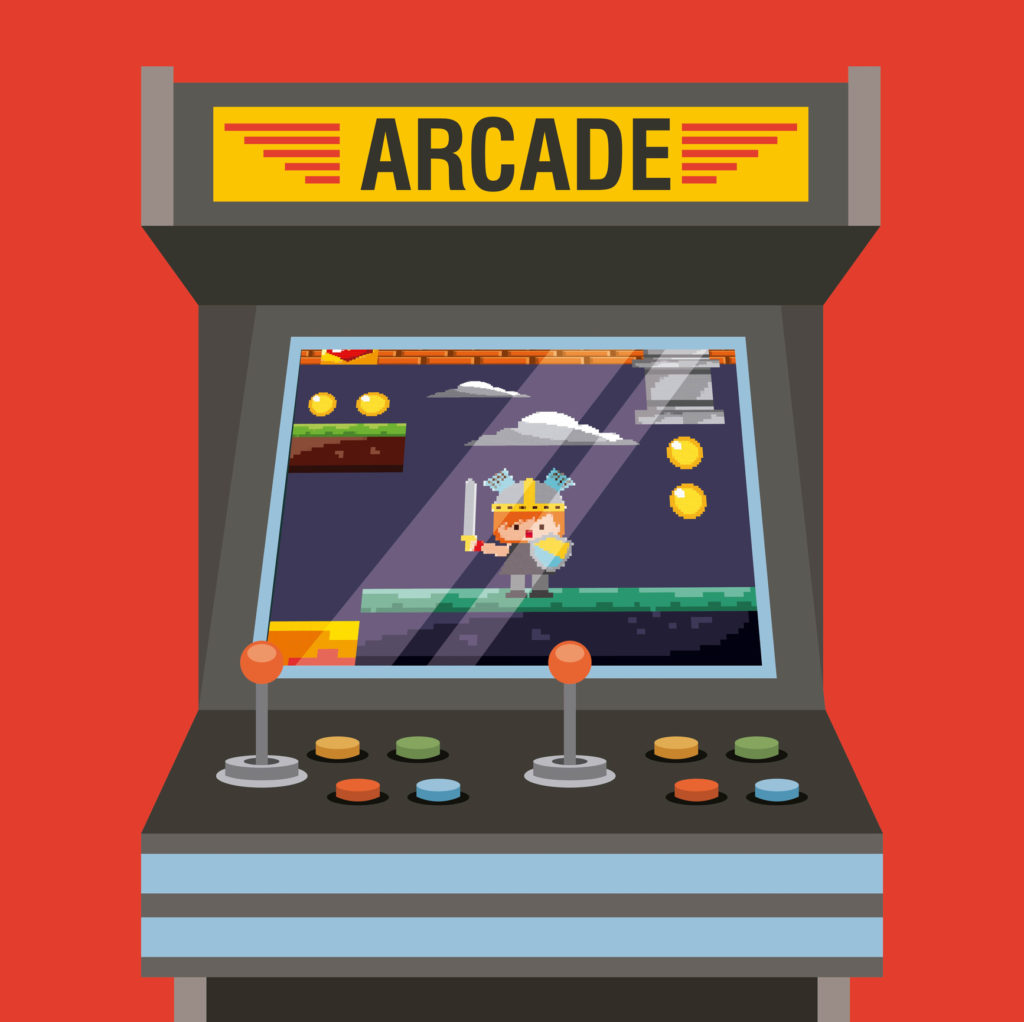 The overall idea was solid, however, after looking at emulators and doing hours of research (outside of office hours), I concluded that it was a lot harder to extract data from an old school arcade game even working with an emulator. My only path forward would be to use a cheat engine to read memory addresses, and all the work would be done in Assembly, which is a low-level ‘80s era programming language. It’s so retro that the documentation was nearly impossible to find and I again found myself at another impasse.

Another colleague of mine who is a board game aficionado, suggested I find an open source game online that I could add code to myself in order to extract data.

Before I started my search, I set some parameters. What I was looking for was a game that had the following characteristics.

Enter Super Smash Bros (SSB), which met all of the above criteria. If you are not familiar with this game, it’s originally owned/produced by Nintendo and the appeal is that you and up to three other players battle each other in “King of the Hill” until there is an “official” game winner. It helps to damage your opponent first before throwing them off the hill. 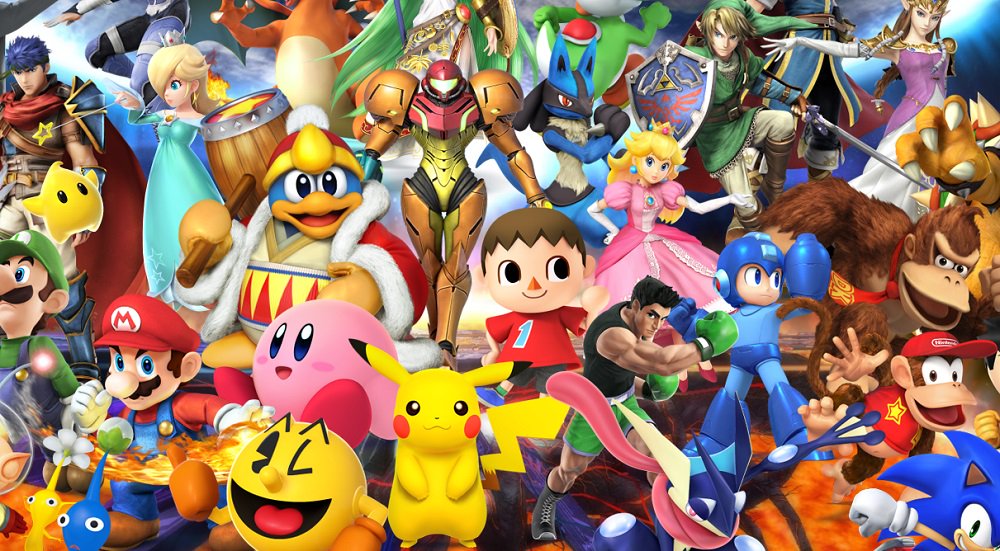 The game win condition is whoever has the most number of lives when the game ends, wins. And the game ends when either time runs out or only one player has lives left. However, this leaves holes for friends to argue who actually won.

If you’ve ever played this game (which is one of strategy), there is a second kind of condition — a social win condition. You can “officially” win by the game rules but there’s context attached to “how” you won — a social win.

I found an open source clone of Super Smash Bros written in Javascript which runs entirely in a web browser. It was perfect. Javascript is a simple language and with the help of a friend to get started, we made it so we could group log messages that would go to the console where a developer could access it and then send it directly into the Sumo Logic platform. 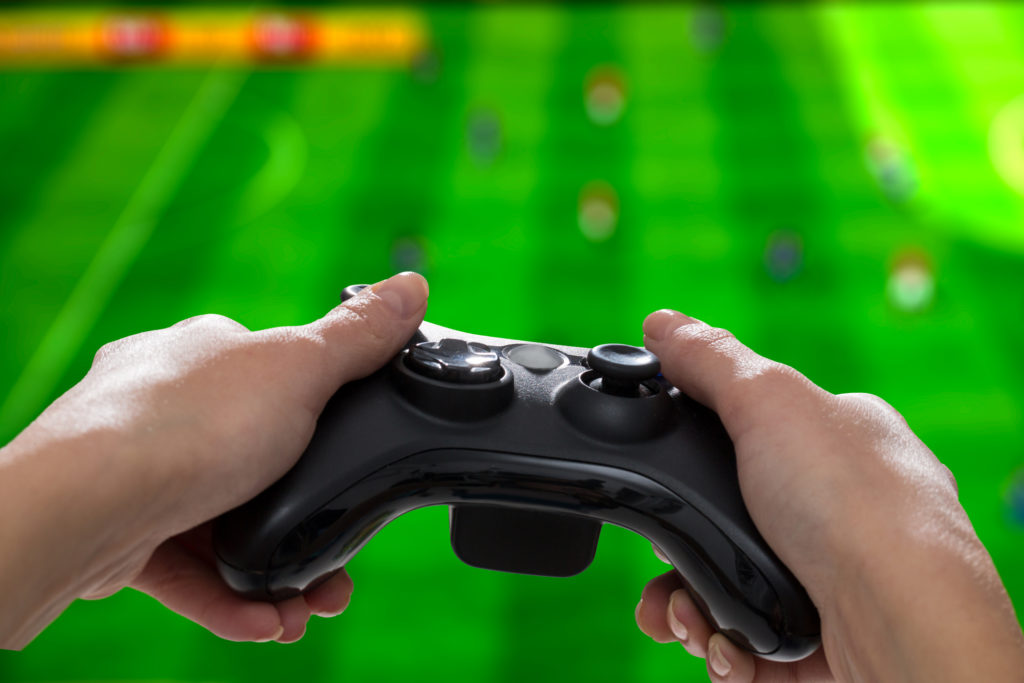 PRO TIP: If you want game controllers for an online video game
like Super Smash Bros, use Xbox controllers not Nintendo!

We would record certain actions in the code, such as:

For example, an animation change would be whenever a player was punched by an opponent.

Now by the game standards, very limited data determines who is the “official” winner of the game based on the predetermined rules, but with this stream of data now flowing into Sumo Logic, we could also identify the contextual “social win” and determine if and how they were different from the game rules. 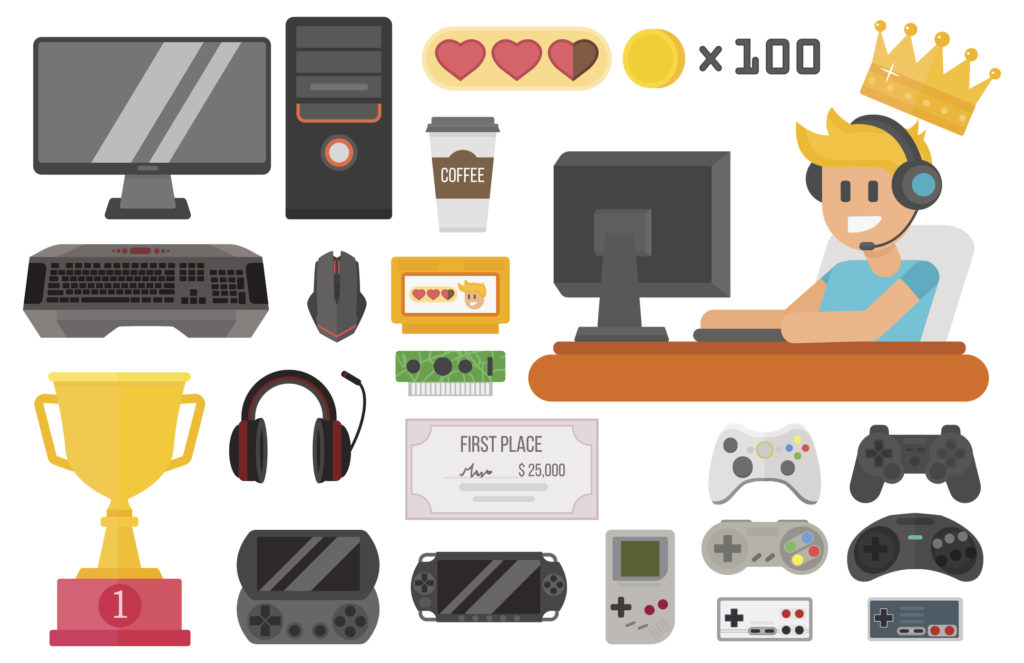 Here’s an example of a “social” win condition: Imagine there’s a group of four playing the game, and one of the players (player 1) hangs back avoiding brawls until two of the three opponents are out of lives. Player 1 jumps into action, gets a lucky punch on the other remaining player who has thus far dominated (and who is really damaged) and throws him from the ring to take the “official” game win.

When we actually played, the data showed exactly what I had predicted.

First, some quick background on my opponents: 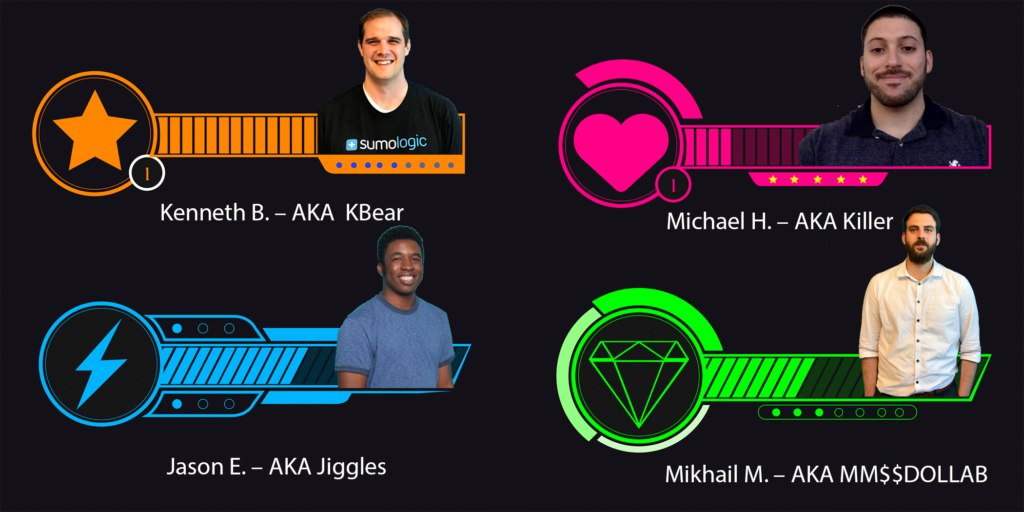 Originally I had intended for us to pseudo choreograph the game to get the data to come out “how I wanted” in order to show that while the game awarded a “winner” title to one player, the “actual winner” would be awarded by the friends to the player who “did the most damage to others” or some other parameter. It only took about three nanoseconds before the plan was out the window and we were fighting for the top.

Our colleague Jason got the clear technical game win. We had recorded the game and had the additional streams of data, and when the dust had settled, a very different story emerged. For instance, Jason came in third place for our social win parameter of “damage dealt.” 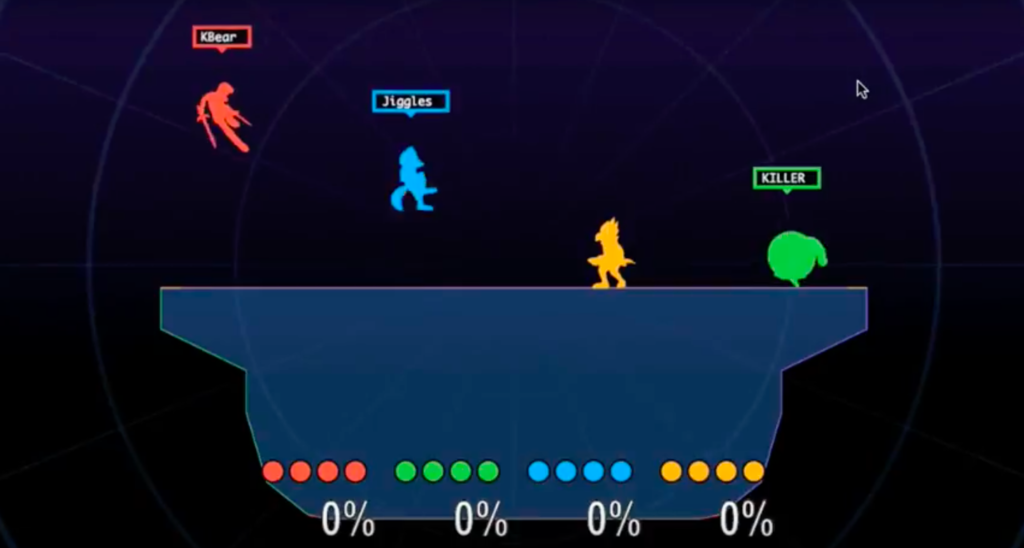 Watching the recording, it’s clear that Jason’s strategy was to avoid fighting until the end. When brawls happened, he was actively jumping around but rarely engaged with the other players. He instead waited for singled-out attacks. Smart, right? Maybe. We did give him the “game win,” however, based on the “damage dealt” social win rule, the order was: Michael, myself, then Jason, and Mikhail.

Watch what happened for yourself:

While this was a fun experiment, there’s also an important takeaway. At Sumo Logic, we ingest more than 100 terabytes of data each day — that’s the equivalent of data from about 200 Libraries of Congress per second. That data comes from all over — it’s a mix of log, event, metrics, security data coming not just from within an organization’s applications and infrastructure, but also from third party vendors. 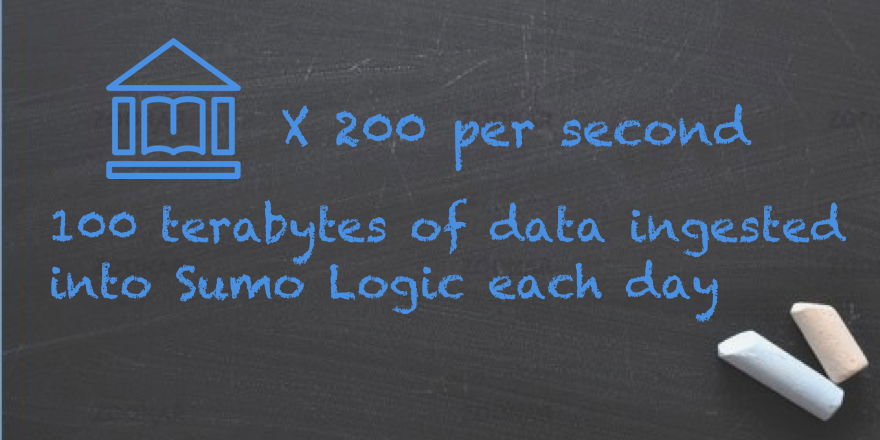 When you have more information, you can see trends and patterns, make inferences, technical and business decisions — you gain an entirely new level of understanding beyond the 1s and 0s staring back at you on a computer screen. People also appreciate the data for different reasons.

For example, engineers only care that the website they served you is the exact page you clicked on. They don’t care if you searched for hats or dog food or sunscreen. But marketers care, a lot. Marketers care about your buying decisions and patterns and they use that to inform strong, effective digital marketing campaigns to serve you relevant content.

At Sumo Logic, we don’t want our customers or prospects to get hung up on the data, we want them to look past that to first understand what our tool does, to understand how it can help them get the specific data they need to solve a unique problem or use case.

“In the words of Sherlock Holmes, it’s a capital mistake to theorize before one has data.” — Kenneth Barry, Sumo Logic

The types of data you are ingesting and analyzing only matters if you first understand your end goal, and have the proper tools in place — a means to an end. From there, you can extract and make sense of the data in ways that matter to your business, and each use case varies from one customer to another. Data powers our modern businesses and at Sumo Logic, we empower those who use this data. And we make sure to have fun along the way! 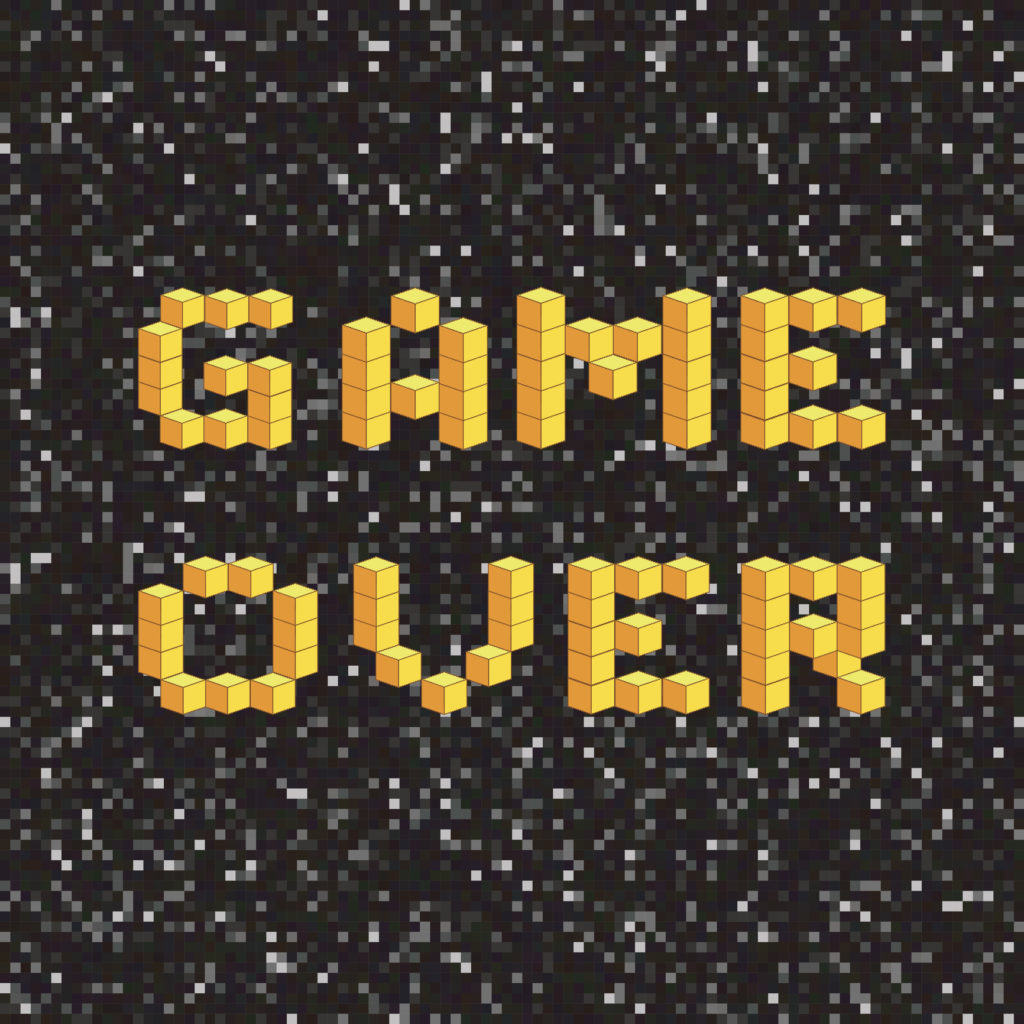 Bonus: Behind the Scenes Video Q&A with Kenneth

Kenneth Barry is a DevOps engineer focused on automation. At Sumo Logic he is charged with helping others understand the product, and building tools that enable his colleagues to do the same. He is an open-source advocate and enjoys developing non-traditional approaches to better solve problems.