Why do you need patterns for building a successful microservices architecture? Shouldn’t the same basic principles apply, whether you’re designing software for a monolithic or microservices architecture? Those principles do largely hold true at the highest and most abstract levels of design (i.e., the systems level), and at the lowest and most concrete levels (such as classes and functions).

But most code design is really concerned with the broad range between those two extremes, and it is there that the very nature of microservices architecture requires not only new patterns for design, but also new patterns for reimagining existing monolithic applications.

The truth is that there is nothing in monolithic architecture that inherently imposes either structure or discipline in design. Almost all programming languages currently in use are designed to enforce structure and discipline at the level of coding, of course, but at higher levels, good design still requires conscious adherence to methodologies that enforce a set of architectural best practices.

Microservices architecture, on the other hand, does impose by its very nature a very definite kind of structural discipline at the level of individual resources. Just as it makes no sense to cut a basic microservice into arbitrary chunks, and separate them, it makes equally little sense to bundle an individual service with another related or unrelated service in an arbitrary package, when the level of packaging that you’re working with is typically one package per container. 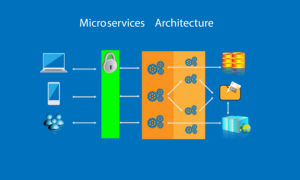 In other words, you really do need new patterns in order to successfully design microservices architecture. The need for patterns starts at the top. If you are refactoring a monolithic program into a microservices-based application, the first pattern that you need to consider is the one that you will use for decomposition. What pattern will you use as a guide in breaking the program down into microservices?

What are the basic decomposition patterns? At the higher levels of decomposition, it makes sense to consider such functional criteria as broad areas of task-based responsibility (subdomains), or large-scale business/revenue-generating responsibilities (business capabilities).

In practice, there is considerable overlap between these two general functional patterns, since a business’ internal large-scale organization of tasks is likely to closely match the organization of business responsibilities. In either case, decomposition at this level should follow the actual corporate-level breakdown of basic business activities, such as inventory, delivery, sales, order processing, etc.

Decomposition by Use Case

In many respects, this pattern is the logical continuation of a large-scale decomposition pattern, since business capabilities and subdomains are both fundamentally use case-based. In this pattern, you first identify use cases: sequences of actions which a user would typically follow in order to perform a task.

Note that a user (or actor) does not need to be a person; it can, in fact, be another part of the same application. A use case could be something as obvious and common as filling out an online form or retrieving and displaying a database record. It could also include tasks such as processing and saving streaming data from a real-time input device, or polling multiple devices to synchronize data.

If it seems fairly natural to model a process as a unified set of interactions between actors with an identifiable purpose, it is probably a good candidate for the use case decomposition pattern.

In this pattern, you define microservices based on the resources (storage, peripherals, databases, etc.) that they access or control. This allows you to create a set of microservices which function as channels for access to individual resources (following the basic pattern of OS-based peripheral/resource drivers), so that resource-access code does not need to be duplicated in other parts of the application.

Isolating resource interfaces in specific microservices has the added advantage of allowing you to accommodate changes to a resource by updating only the microservice that accesses it directly.

This pattern is likely to be most useful in the case of internal operations which perform a clearly defined set of functions that are likely to be shared by more than one part of the application. Such responsibility domains might include shopping cart checkout, inventory access, or credit authorization.

Other microservices could be defined in terms of relatively simple functions (as is the case with many built-in OS-based microservices) rather than more complex domains.

Beyond decomposition, there are other patterns of considerable importance in building a microservices-based architecture. Among the key patterns are those for deployment. There are three underlying patterns for microservices deployment, along with a few variations:

In this pattern, you deploy multiple instances of a service on a single host. This reduces deployment overhead, and allows greater efficiency through the use of shared resources. It has, however, greater potential for conflict, and security problems, since services interacting with different clients may be insufficiently isolated from each other.

This pattern deploys each service in its own environment. Typically, this environment will be a virtual machine (VM) or container, although there are times when the host may be defined at a less abstract level. This kind of deployment provides a high degree of flexibility, with little potential for conflict over system resources.

Services are either entirely isolated from those used by other clients (as is the case with single-service-per-VM deployment), or can be effectively isolated while sharing some lower-level system resources (i.e., containers with appropriate security features). Deployment overhead may be greater than in the single host/multiple services model, but in practice, this may not represent significant cost in time or resources.

In this pattern, the service runs directly on pre-configured infrastructure made available as a service (which may be priced on a per-request basis); deployment may consist of little more than uploading the code, with a small number of configuration settings on your part. The deployment system places the code in a container or VM, which it manages. All you need to make use of the microservice is its address.

Among the most common serverless environments are AWS Lambda, Azure Functions, and Google Cloud Functions. Serverless deployment requires very little overhead. It does, however, impose significant limitations, since the uploaded code must be able to meet the (often strict) requirements of the underlying infrastructure.

This means that you may have a limited selection of programming languages and interfaces to outside resources. Serverless deployment also typically rules out stateful services.

Applying Other Patterns to Microservices Architecture

There are a variety of other patterns which apply to one degree or another to microservices deployment. These include patterns for communicating with external applications and services, for managing data, for logging, for testing, and for security. In many cases, these patterns are similar for both monolithic and microservices architecture, although some patterns are more likely to be applicable to microservices than others.

Fully automated parallel testing in a virtualized environment, for example, is typically the most appropriate pattern for testing VM/container-based microservices.

As is so often the case in software development (as well as more traditional forms of engineering), the key to building a successful microservices architecture lies in finding the patterns that are most suitable to your application, understanding how they work, and adapting them to the particular circumstances of your deployment.

Use of the appropriate patterns can provide you with a clear and accurate roadmap to successful microservices architecture refactoring and deployment.

Michael Churchman is involved in the analysis of software development processes and related engineering management issues.

Top Patterns for Building a Successful Microservices Architecture is published by the Sumo Logic DevOps Community. If you’d like to learn more or contribute, visit devops.sumologic.com. Also, be sure to check out Sumo Logic Developers for free tools and code that will enable you to monitor and troubleshoot applications from code to production.