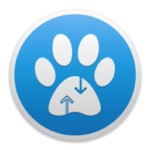 As an API Engineer, you’ve probably spent hours carefully considering how API will be consumed by client software, what data you are making available at which points within particular workflows, and strategies for handling errors that bubble up when a client insists on feeding garbage to your API. You’ve written tests for the serializers and expected API behaviors, and you even thought to mock those external integrations so you can dive right into the build. As you settle in for a productive afternoon of development, you notice a glaring legacy element in your otherwise modern development setup:

…one of these things is not like the others.

Once upon a time, that little text file was state-of-the-art in API development. You could easily copy-paste commands into a terminal and watch your server code spring into action; however, deviating from previously built requests required careful editing. Invariably, a typo would creep into a crucial header declaration, or revisions to required parameters were inconsistently applied, or perhaps a change in HTTP method resulted in a subtly different API behavior that went unnoticed release over release.

HTTP Request Builders were developed to take the sting out of developing and testing HTTP endpoints by reducing the overhead in building and maintaining test harnesses, allowing you to get better code written with higher quality. Two of the leaders in the commercial space are Postman and Paw, and they provide a number of key features that will resonate with those who either create or consume APIs:

From here, let’s explore the main features of HTTP Request Builders via Paw and show how those features can help make your development and test cycles more efficient. Although Paw will be featured in this post, many of these capabilities exist in other HTTP Builder packages such as Postman.

How to Streamline your HTTP Request Pipeline

Command-line interfaces are great for piping together functionality in one-off tests or when building out scripts for machines to follow, but quickly become unwieldy when you have a need to make sweeping changes to the structure or format of an API call. This is where visual editors shine, giving the human user an easily digestible view of the structure of the HTTP request, including its headers, querystring and body so that you can review and edit requests in a format that puts the human first. Paw’s editor is broken up into three areas. Working from left to right, these areas are:

As you work through building up the requests that you use in your API workflows, you can easily duplicate, edit, and execute a request all in a matter of a few seconds. This allows you to easily experiment with alternate request formats or payloads while also retaining each of your previous versions. You might even score some brownie points with your QA team by providing a document with templated requests they can use to kick-start their testing of your new API!

Organize Request Lists for Yourself and Others

The Request List panel also doubles as the Paw document’s organization structure. As you add new requests, they will appear at the bottom of the list; however, you can customize the order by dragging and dropping requests, or a create folders to group related requests together. The order and names attached to each request help humans understand what the request does, but in no way impacts the actual requests made of the remote resource. Use these organization tools to make it easy for you to run through a series of tests or to show others exactly how to replicate a problem.

If the custom sort options don’t quite cover your needs, or if your document starts to become too large, Sort and Filter bars appear at the bottom of the Request List to help you focus only on the requests you are actively working with. Group by URL or use the text filter to find only those requests that contain the URL you are working with. 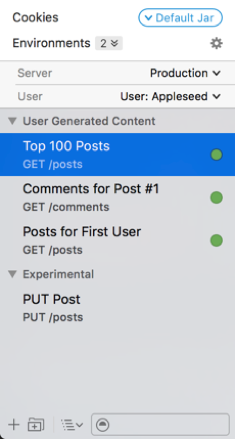 Dealing with Environments and Variables

Of course, many times you want to be able to test out behaviors across different environments — perhaps your local development instance, or the development instance updated by the Continuous Integration service. Or perhaps you may even want to compare functionality to what is presently available in production.

It would be quite annoying to have to edit each of your requests and change the URL from one host to another. Instead, let Paw manage that with a quick switch in the UI.

The Manage Environments view allows you to create different “Domains” for related kinds of variables, and add “Environments” as necessary to handle permutations of these values:

This allows you flexibility in adjusting the structure of a payload with a few quick clicks instead of having to handcraft an entirely new request. The Code Generator pane at the bottom of the Request Builder pane updates to show you exactly how your payload changes: 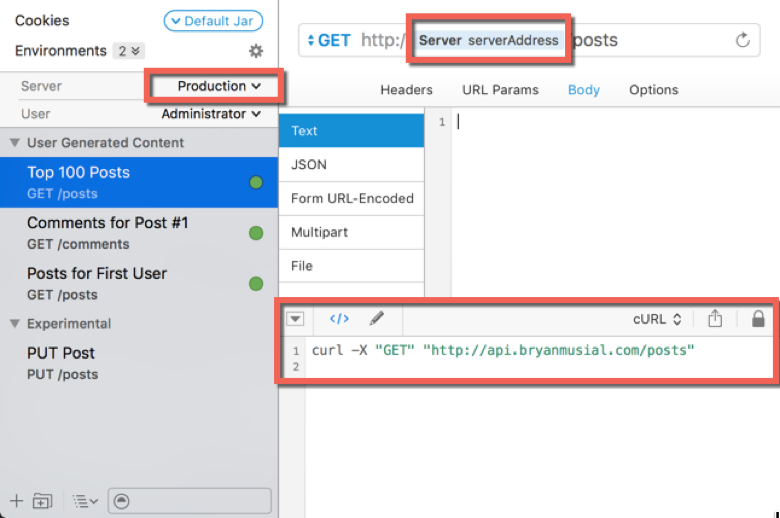 Figure 5. Paw Document showing the rebuilt request based on the Server Domain’s Environment.

One of the most common setups is to have a Server Domain with Environments for the different deployed versions of code. From there, you could build out a variable for the Base URL, or split it into multiple variables so that the protocol could be changed, independent of the host address — perhaps in order to quickly test whether HTTP to HTTPS redirection still works after making changes to a load balancer or routing configuration. Paw’s variables can even peer into other requests and responses and automatically rewrite successive APIs.

Many APIs require some form of authentication to read or write privileged material. Perhaps the mechanism is something simple like a cookie or authentication header, or something more complex like an oAuth handshake. Either way, there is a bit of data in the response of one API that should be included in the request to a subsequent API. Paw variables can parse data from prior requests and prior responses, dynamically updating subsequent requests: 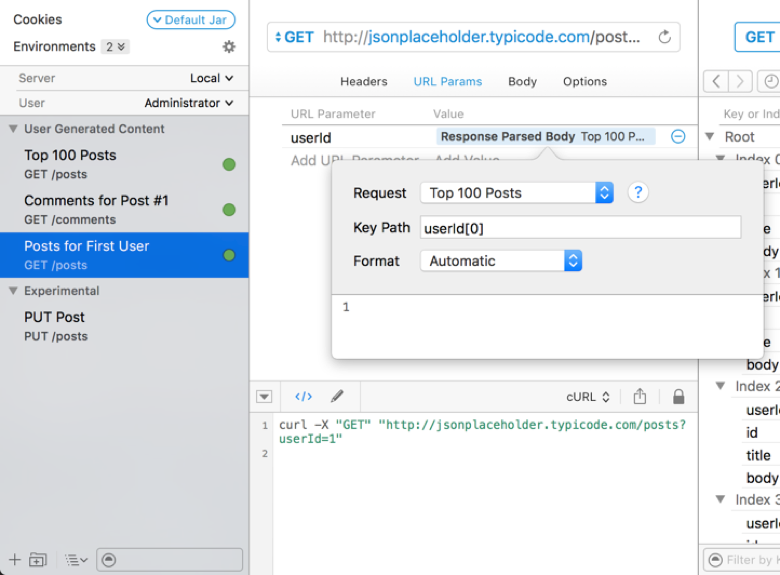 Figure 6. Paw Document revealing the Response Parsed Body Variable extracting data from one request and injecting it into another.

In the case shown above, we’ve set a “Response parsed body” variable as a Querystring parameter to a successive API, specifically grabbing the UserId key for the post at index 0 in the Top 100 Posts Request. Any indexable path in the response of a previous request is available in the editor. You may need to extract a session token from the sign-in API and apply it to subsequent authenticated-only requests. Setting this variable gives you the flexibility to change server environments or users, execute a sign-in API call, then proceed to hit protected endpoints in just a few moments rather than having to make sweeping edits to your requests.

HTTP Request Builders help give both API developers and API consumers a human-centric way of interacting with what is primarily a machine-to-machine interface. By making it easy to build and edit HTTP requests, and providing mechanisms to organize, sort, and filter requests, and allowing for fast or automatic substitution of request data, working with any API becomes much easier to digest. The next time someone hands you a bunch of cURL commands, take a few of those minutes you’ve saved from use of these tools, and help a developer join us here in the future!

Using HTTP Request Builders to Create Repeatable API Workflows is published by the Sumo Logic DevOps Community. If you’d like to learn more or contribute, visit devops.sumologic.com. Also, be sure to check out Sumo Logic Developers for free tools and code that will enable you to monitor and troubleshoot applications from code to production.

Bryan Musial (@BKMu) is a Full-Stack Senior Software Engineer with the San Francisco-based startup, Tally (www.meettally.com), working to make managing your credit cards automatic, simple, and secure. Previously, Bryan worked for the Blackboard Mobile team where he built and shipped iOS and Android applications used by millions of students and teachers every day.